The finishing touches are in the works for the 2017 Frankenmuth Bavarian Festival, which will take place Thursday, June 8 through Sunday, June 11, 2017. The festival, which is Michigan’s largest celebration of Bavarian heritage, has been a Frankenmuth tradition for over 50 years.

The event, created by William “Tiny” Zehnder and his wife Dorothy, started in 1959. The initial event was planned to celebrate the grand opening of the Bavarian addition of Fischer’s Hotel (now the Bavarian Inn Restaurant).

The first Bavarian Festival Parade in 1961 was attended by an estimated 10,000 people. Today, this festival in “Michigan’s Little Bavaria” has grown even bigger and was named one of the state’s “Top 5 Festivals” by AAA’s Michigan Living Magazine. This year continues the tradition with a new twist.

Visitors to this year’s festival will be greeted by a different format from years past, according to Frankenmuth Civic Events Council President Russ Uphold. “This year’s Bavarian Festival will be a ‘strassenfest,’ – a street festival, which will be taking place along Main Street near the Bavarian Inn Restaurant and the Zehnder Park. We expect to have three main stages, with a different form of entertainment at each venue, such as polka music, Top 40 tunes, and more,” Uphold said. He noted the new location will include a Sommergarten, where festivalgoers can feast on traditional German fare and enjoy a frosty beverage. Children’s activities will be nearby.

The festival will be held in downtown Frankenmuth, with the main tent in Zehnder Park hosting a number of traditional German entertainers. There will also be a “rock” tent behind Tiffany’s, which will feature the Sinclairs and Bromantics on Friday and Saturday night. But that’s not even scratching the surface of what visitors can enjoy. The festival will start off on Thursday with a Princess Coronation and Keg Tapping. On Friday, guests can take part in a Chicken BBQ and Maypole Raising Ceremony. There will also be Festival Olympics at 7 p.m.

The fun starts early on Saturday, with a pancake breakfast and Bloody Mary bar starting at 8 a.m. There will be events for all ages – from Kinder Platz kids’ activities, a children’s/kids parade at 10 a.m., an Instagram Scavenger Hunt, to a brat, snacks and beer meal! Click here to view the fesitval’s schedule of events. 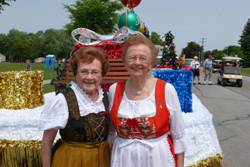 Everything is wrapped up with the big Bavarian Festival parade on Sunday, June 11, with more than 100 marching units making their merry way along Main Street.

Sounds like fun? Mark your calendar and celebrate the heritage of Frankenmuth. Start planning your visit by making reservations at the Bavarian Inn Restaurant and the Bavarian Inn Lodge because bookings fill up quickly as the festival dates grow nearer. Hope to see you here!